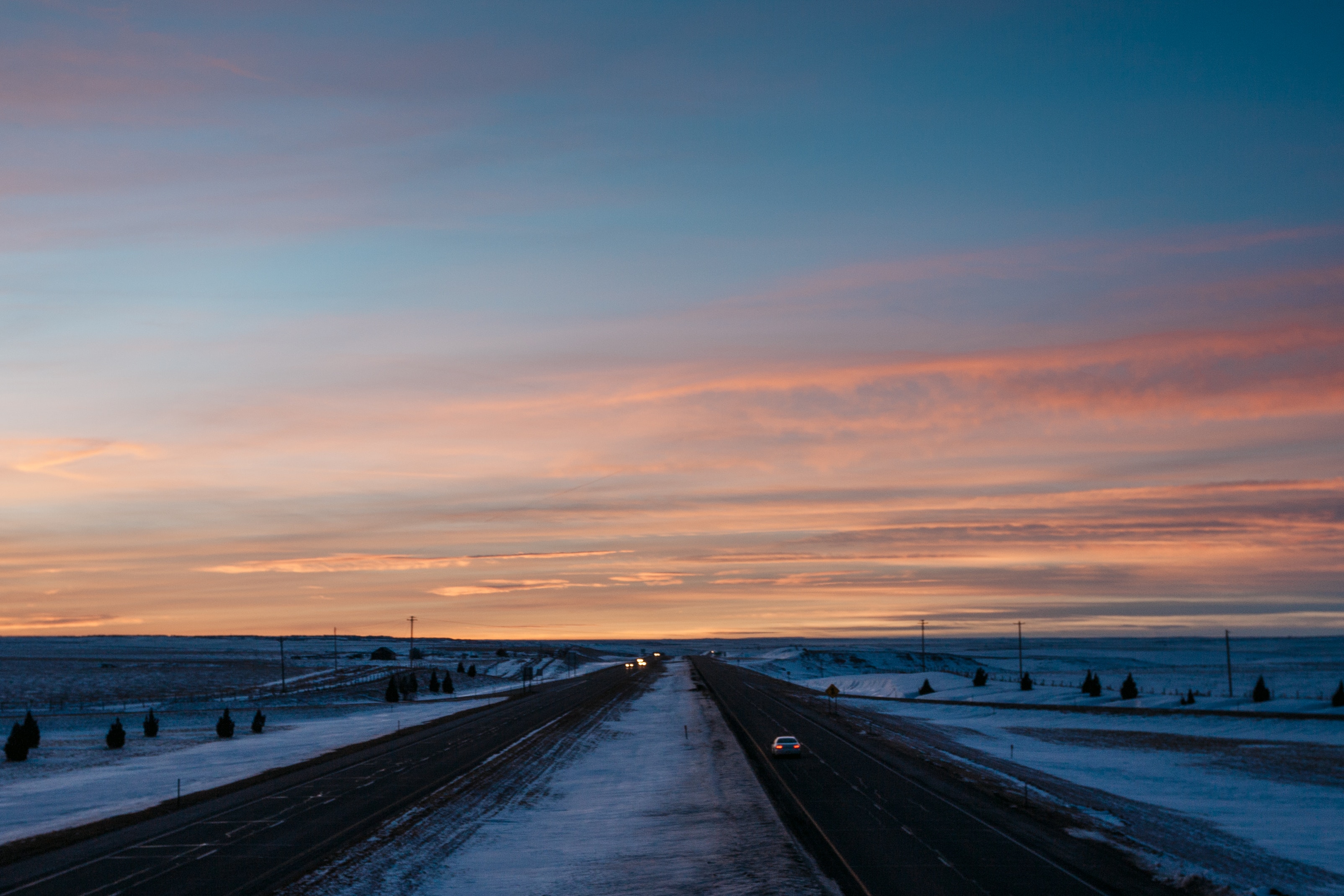 Bella couldn?t believe she was on her way back home again. Almost a decade passed since she left home. She had become so adept at making excuses about not going back to Connecticut that her parents made trips to Illinois when they wanted to see her. She was lost in thought watching the fields of corn pass by as Lenny drove her car. She couldn?t believe he was coming back home with her.

?So tell me more about them,? he said.

?The girls you?ve been trying to avoid.?

Bella looked at Lenny for a moment. He looked so handsome with his aviator sunglasses on. She looked back out the window. ?Skylar was the head of the clan. She was like Ferris Bueller, but a female evil version. She had us all fooled. She?s a natural politician. Knows what to say and when to say it. She?s the entire package: face, hair, and body.?

Lenny glanced over at Bella. Her leg was bouncing up and down. He reached over and put his hand gently on her knee. ?Relax, Bell. It?s just me.? Bella let out a deep sigh. ?I know. I?m trying…it?s just…I haven?t spoken about this in so long. Are you sure you want to hear all this??

?Sasha was mad. I?m getting the picture. She was a clone.?

?Right. Whenever Skylar was absent from school Sasha would go home sick. She couldn?t breathe unless Skylar was there. She was up under her all the time. It was kind of pathetic actually. And then there was Reese. She didn?t really belong in the click, but her dad and Skylar?s dad were best friends, so their friendship was kind of by default.

?I don?t think she really wanted to be friends with either of them but I guess the lure of being part of the in crowd was hard to resist. I could tell she just wanted to go her own way but didn?t quite know how.?

?How could you tell??

?She always stood to the side, you know? Whenever the three of them were together. She was always the quiet one. She was like a lost puppy, if that makes sense.?

?So…do you know why they killed her??

Bella shook her head. ?But I have my own theory about it.?

?A boy? Girls really get all worked up over boys like that ??

?You have no idea. That?s why I never really got into the whole dating scene. Too much drama and I?m not one to fight over boys. My father always told me only dogs fight over bones. And since boys were at the top of the list in middle school, I just chose another path.?

?My camera. Anyway. There was this really cute guy named Ryan. Funny guy. Really sweet. Everybody loved him. He was head of every club he was in. Track star, basketball star. Good grades. Down to earth. Everyone loved Ryan. Including Skylar. But Ryan couldn?t stand her. I think he saw right through her and that really pissed her off.?

?Yeah. Well, he asked Reese out to a movie one day during lunch. Skylar acted like she was so happy for Reese. But I overheard her in the locker room tell Reese that she better break the date if she knew what was good for her. Later that day after school I saw Reese talking to Ryan, and then she walked away and looked like she was so upset.?

?She let Skylar talk her out of the date??

?I don?t think she felt like she had much choice.? Bella kept looking out the window. ?Wow, there?s nothing but corn out here.? Lenny laughed. ?So,? he said, ?if she broke off the date with Ryan, why did Skylar kill her??

?Yes, but can you stop saying that? I?m freaking out.?

?Sorry. So if Reese broke off the date, why did Skylar have it in for her??

?A few weeks later, Ryan went by Reese?s house. Spent the whole day with her. Her family was having a cookout or something and Reese?s family invited him to stay. They had a really good time and apparently shared a kiss.?

?Yup. Sasha lives about four houses down from Reese. She saw Reese walking him out to his car and also saw him kiss her. She ran back in her house and blabbed the whole thing to Skylar. She?d do anything to win Skylar?s affection.

?That Monday at school Skylar and Reese had this huge fight. Well, really Skylar was laying into Reese and Reese kept trying to calm her down. Ryan saw the whole thing and blew up at Skylar. Told her she was shallow and superficial.?

?To say the least. Nobody ever talked to Skylar like that.?

?You seriously think they killed Reese because Ryan told her to get lost??

Bella nodded. ?Sasha would do anything Skylar told her to. Anything.?

They rode in silence for a while. Bella was regretting letting Lenny talk her into going back home. Lenny was drumming his thumb and forefinger on the steering wheel. ?What are you thinking about,? she asked.

?This whole situation and how to handle it.?

?Lenny, this isn?t your problem, okay??

?There?s nothing you can do. The damage is done and me going back and telling the police probably won?t do anything. I don?t even have any proof. All I have is my word and I doubt the police are going to believe me.?

?What makes you think that??

?Because I?m nobody to them, Lenny. And Skylar and her family are the big shots in town. I?ll probably be making more trouble for myself than for her. Hell, they might think I had something to do with it.?

?No, seriously, Lenny. This was a bad idea. We should just turn around and forget the whole thing.?

?No, this whole idea is ridiculous. You have no idea what you?re walking into with me. None.?

?Bell, all you can do is tell the police everything you told me. What they do with the information after that isn?t up to you. But at least your conscience will be clear.?

?Will it? Telling what I know now isn?t going to bring Reese back.? Bella pointed at the highway sign. ?Can you get off at that exit. I need some air.?

Lenny put on his signal and got off at the rest area. Bella jumped out of the car right as it came to a stop. She ran into the restroom. Lenny watched her from the driver?s seat. He shook his head. He wanted to make all of this go away for her. He also knew that she might be right. What if the cops did blame her? Then her life would be torn apart for something two other girls did. He knew she wouldn?t like it but he had to press her for more. Maybe there was something she forgot that would link Skylar and Sasha to the murder. Something concrete that the police could use.

He got out to stretch his legs and get some drinks and snacks. There was a small crowd around the vending machine so Bella didn?t see Lenny as she walked out of the woman’s restroom. He got some chips and candy bars and two ginger ales. Bella was sitting on the hood of the car when he got back. Her face looked like she?d been crying.

?I got some ginger ale. Thought you could use that.?

Bella took the soda from him. ?Thanks.?

Bella pulled the tab on her soda can and listened as the soda can popped open. She watched the little bubbles jump up and try to escape from the can. She let the fizz settle and then took a sip. Lenny opened the candy bar and took a bite. ?I?ve been thinking,? he said.

Bella took a gulp of her soda. ?About??

?Maybe there?s something you?re forgetting. Something that really ties them to the crime.?

?Are you absolutely sure??

?I?m positive. Can we talk about something else for a while??

?Okay. Tell me more about your love of photography.?

Bella got into the car and Lenny followed her lead. He started the car back up and they were back out on the highway.

?I love…well loved…taking pictures. I really love capturing candid moments or beautiful nature scenes. When you take pictures it forces you to slow down and really look at the world around you.?

?Gosh. I haven?t thought about pictures in years. I think one of the best was at my parents? 20th anniversary party. We had a surprise cookout for them at our home. It was a wonder they never caught on to what my brother and I had planned. But they never did.?

?How?d you manage that,? Lenny laughed, ?my parents are way too nosy to get anything by them.?

Bella laughed. ?So are mine, but Billy and I did it. With a lot of help from a few of their close friends. Anyway, I caught this one picture of them as they were coming into the backyard. Their faces were in total surprise, but also so happy. Hard to describe. It was just a genuine moment. And I caught it on film.? Bella took another sip of her ginger ale. ?My folks loved that photo so much they had it enlarged and framed. Probably still hanging in the hallway at the house.?

?Name another one,? Lenny said.

Bella and Lenny spent the rest of the trip talking about her photos and the good parts of her childhood before the incident. Bella asked Lenny questions, too. Lenny was getting to know Bella beyond the superficial surface stuff and the person shew as hiding was just as beautiful and compassionate and talented as he?d imagined.

They arrived in Connecticut late that night hopped up on sugar and caffeine. Bella took over the driving when they got to New Jersey. By the time they reached Bella?s house there wasn?t too much left unsaid between them. Bella pulled up slowly into the driveway.

?Should we beep the horn or something??

?The lights are off. They?re probably asleep.?

?Trust me, they?re not sleeping.? Bella put the car in park and turned off the engine. ?Waaaaiiit for it.? After a few seconds the garage door opened and the flood lights came on. Bella looked over at Lenny. ?See? Told you.? Lenny burst out laughing. They got out of the car and Bella?s mother took her into a huge embrace while her father shook Lenny?s hand.

Lenny shook his hand. ?Lenny, sir. Good to meet you.?

?Daddy, be nice,? said Bella as she went to hug him.

?Baby girl, let me look at you. You haven?t changed a bit.? He pulled her into a long hug.

?You both must be exhausted,? said Bella?s mom, ?come on in the house. I?ve got the guest room all made up for you, Lenny, and Bee, your room, well you know where it is,? she laughed.

Bella popped the trunk on her car and Lenny got their suitcases. Mr. Blake helped Lenny with the bags while Bella and her mom walked behind them into the house.

?Is Billy here yet??

?He?s asleep in his room. He?s taking this whole thing really hard. We all are. He was so glad to hear you were coming back, Bee.?

?Kind of? Well excuse me,? she laughed.

?You know what I mean, momma.?

?You come to see me all the time, momma.?

?I know, but it?s good to have you back here. What?s kept you away so long??

?That?s a long story, momma. But I think I?m ready to tell you now.?

Tune in next Monday for Part 3 of Going Home.